The details for this update are as follows: 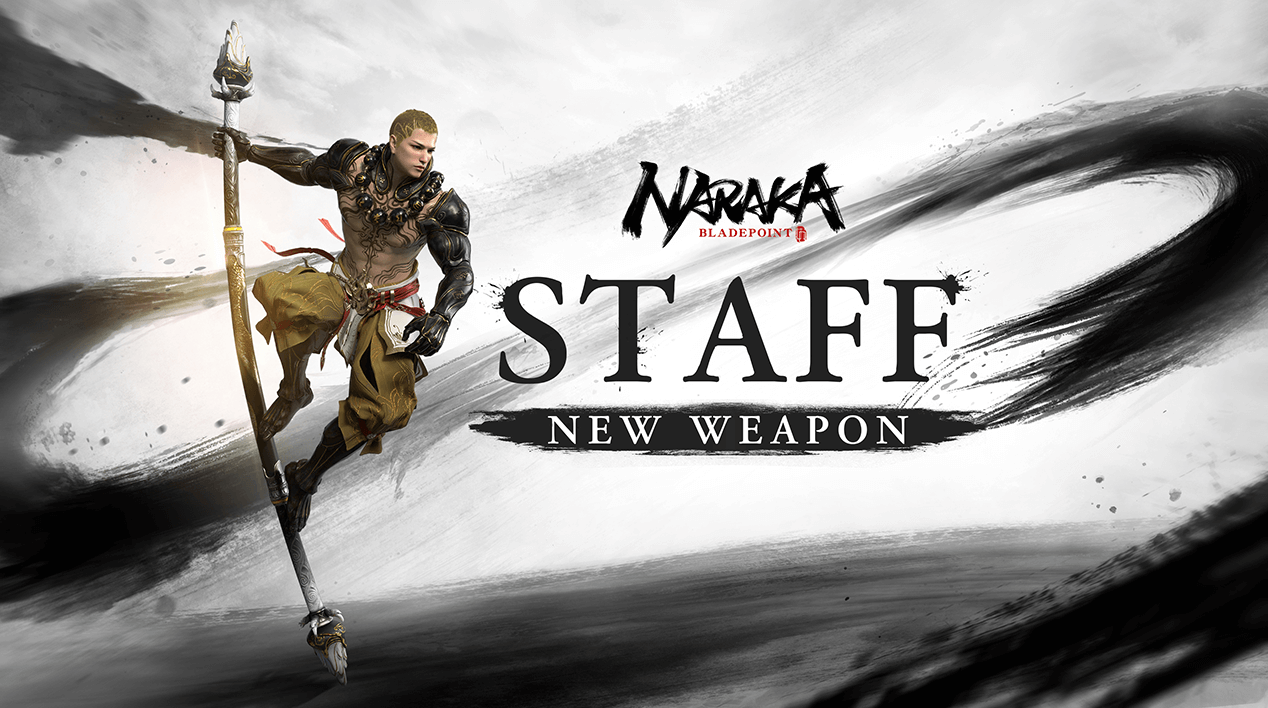 In the new version, we will bring you "the origin of all melee weapons" - Staff. Come and try it out for yourself!

The new weapon "Staff" and "Spear", which you're already familiar with both belong to the category of "Long-handle Weapon", and are called as Congeneric Weapons. Though trying to lower the starting difficulty of the new weapon as much as possible, we will still bring you a brand-new combat experience and the fun of the game.

(1) Congeneric Strike: Staff has the same horizontal and vertical strike combos as Spear.

(2) Congeneric Souljade: [Spear Sap] is renamed as [Long-handle Weapon Sap] and is now a shared Souljade for Staff and Spear together with [Dual Ring].

Like martial arts itself, weapons are diversified as well.

(2) How to obtain: it can be obtained from the Rift Dealer or Morus' Blessing.

Yushan Ruins has been covered in ice for a thousand years. Now it has come out again. Is it a blessing? Or a curse?

2. As the ice melts, coralline tree in the center of the oasis reappears, bringing endless vitality to the place.

1. Interaction with Enigmatic Rift will teleport players to the indicated location, with a CD of 18 sec (independently counted for each player).

2. The location of Enigmatic Rift may vary in different matches, but it can be known when players choose their spawn points.

1. Added a brand-new weather to Holoroth: Starry Night (in place of Night).

During the Meteor Rain, numerous meteors will fall from the sky, causing damage within an area.  Where the meteor crashed, a stardust will remain for a while. Attacking the stardust helps to restore a certain amount of Rage for all units within range. And new Troves will appear in the area of Meteor Rain and disappear after it ends.

V. Realm of Yang Now is Available in the Herald's Trial

1. There are 2 rounds in each match, with the 1st round having 3 Realms of Yang and the 2nd round only 1.

2. Winner: The winner will obtain Morus' Blessing, details of which are as follows:

i. Morus' Blessing rewards for the winner of the 1st round: Vermillion Bird's Might or Mystic Might, as well as other equipment and items from Morus' Blessing of the current round.

i. Morus' Blessing rewards for the winner of the 1st round: any one of Draco Storm, Vermillion Bird's Might and Mystic Might, as well as other equipment and items from Morus' Blessing of the current round.

ii. Morus' Blessing rewards for the winner of the 2nd round: Draco Storm or Mystic Might, as well as other equipment and items from Morus' Blessing of the current round.

As the ice sheets in Yushan Ruins thin and fade, an ancient temple is revealed to the world once more.

2. Moonbane Candles are used to light up Yushan Scrolls for random quests. Complete these to earn plentiful rewards, including Dawn Treasures.

3. All players share the same scroll quests and once you've completed a certain one, it will not appear again for the second time.
*It's been whispered that there have been sightings of Yushan treasures in the world following the melting of the Yushan glaciers.

I. Yueshan
1. Shortened the recovery frames of the second stage of his Horizontal and Vertical Strikes under the General's state.

2. Target hit by [Rampage] will not be knocked airborne by common attacks.

II. Takeda Nobutada
[Demonic Strike] and [Demonic Strike·Havoc] will no longer cause a stagger effect to Yueshan in the General state (when charging or casting skills) and Tianhai in the Vajra state.

I. General Adjustments for Ranged Weapons

Aiming with the right mouse button was added to all ranged weapons.

II. Longsword
1. Slightly reduced the stagger time caused by launching horizontal strikes while sprinting to enemies on the ground with Longsword.

2. Increased the attack range of crouch horizontal strike with the Longsword.

III. Dual Blades
Slightly increased the stagger time of the standing enemies caused by [Severance]’s forepart strike, to ensure that the enemies have no chance to parry its posterior strike.

V. Spear
Optimized the motion of the Upward Strike.

VI. Nunchucks
Optimized the motion of vertical charging while sprinting.

(1) Damage Multipliers of Omnius·Rock's ranged grabbing attack were decreased from 2 to 0.5;

(2) Damage Multipliers of Omnius·Rock's airborne grabbing attack were increased from 0.28 to 0.5.

2. Reduced the smashing damage when Omnius·Rock has multiple players in hand.

(1) Damage Multipliers of Omnius·Rock's smashing attack when he grabbed multiple players in hand were decreased from 12 to 9;

(2) Damage Multipliers to the players on the ground when Omnius·Rock smashes the in-hand players were decreased from 3 to 1.

3. Adjusted the attack of Ominus In Nightscream level:

(1) Attack of Omnius·Hell Scorch was decreased by 22%.

4. In the Hard level, increase the probability of Omnius·Hell Scorch's blue Focus strike.

Maximum Sense Level of Souljades dropped in different levels were increased according to difficulty. Now players can get Showdown Souljades with the Sense Level higher than what is recommended in next difficulty level.

2. When the player’s Sense Level is higher than the recommended one, monsters’ damage to whom is highly decreased.

III. Omen Adjustments
Adjusted the affected area of the Forbidden Seal in [Omnius Descent]. It now only covers about half of the battlefield.

2. Optimized the combat move of monsters in Desert Tribulations.

I. Temporarily Unavailable Casual Modes
"Bloodsport" and "Omni's Nightmare" are temporarily unavailable. "Shadow Surge" and "Through the Fire" will open at a certain time every day. We are sorry for any inconvenience caused.

(1) Added two new collapsed areas to the walls of the City of Tang.

(2) Adjusted the structure of Boomerang Cliff. A new spot and an entry route were added.

Added Firefly Cages to the Starry Night weather in Holoroth.

III. Adjustments to Herald's Trial Mode
1. Number of Morus' Blessings for the first and second round was reduced from 2 to 1.

2. Rebirth Charms in Rift Dealer was increased from 2 to 3.

V. Movement Adjustments
Optimized the hit feeling when a player runs between the left and right wall.

(1) Optimized the special effect of burning.

(3) Optimized the special effect of ki

VII. Optimization of the settlements in the Survival Modes
1. The top 2 teams can choose whether to fight till the end or quit the game, without reputation score loss.

2. Settlement interface will show stats of all players in the top 2 teams.

2. New features such as naming and announcement were added. Players can join others' Justice Chamber or use Tae/Gold to create one and without purchasing the Advanced Hidden Treasure.

2. Fixed an issue where training opponents occasionally could not attack with blue Focus during counter practice.

V. Weapons
Optimized the design of the weapon interface. The category of the congeneric weapon was added to the melee weapon.

VI. Narakapedia
1. Optimized the interface of Souljades in Narakapedia. Players now can easily distinguish the shared Souljades of congeneric weapons.

2. Adjusted demo videos of Narakapedia, which will now play after tapping.

VIII. Adjustments to Talent Tab
Talent is now moved in the Hero interface.

1. Fixed an issue where running a game for an extended time could cause a memory leak when DLSS was enabled on NVIDIA.

I. BATTLEPASS Updates
[Spark] BATTLEPASS is now available, which includes a variety of valuable items and skins! Players can obtain more rewards through unlocking Hidden Treasure!

1. Loop Guarantee: On top of the basic drop rate, players are guaranteed to receive at least 1 Purple (Epic) or better reward during the process of opening at most 10 Treasures. This can be triggered multiple times.

2. Special Guarantee: On top of the basic drop rate, players are guaranteed to receive at least 1 Red (Extreme) reward during the process of opening the first 100 Treasures. This cannot be triggered repeatedly.

3. Red (Extreme) rewards will not be repeated until all of them have been obtained.

[Hero Badge] store is now available. Use your Hero Badge Points to upgrade it and unlock Lotus Treasures and amazing cosmetics!

3. Wuchen Legendary Outfit [Incompletion Robe] has returned to its standard price of 1,800 Gold.

4. Longsword Legendary Skin [Winter's Savor] has returned to its standard price of 1,500 Gold.

I. Hero-related Bugs
Fixed an issue where the bullets of ranged skills released by certain heroes when they were under attack would not take effect upon hitting enemies.

II. Battle-related Bugs
1. Optimized an issue where monsters in Showdown were prone to reset their attack motion during network fluctuation.

2. Fixed a bug where players couldn't turn charging to counter after getting up from the ground.

3. Fixed a bug where the Wyrmling would not take damage while being hit by golden Focus.

4.Fixed the bug where Yoto Hime's 3 additional slashes of [Ominous Blade: Combo] cannot hit enemies when the camera is blocked by obstacles in the scene.